History of Statue of Liberty

The Statue of Liberty history according to the National Park Service, begins with an idea presented in the name of the the French people to the United States by the president of the French Anti-Slavery Society, Edouard Rene de Laboulaye, who was and also a prominent and relevant political thinker of his time. It was designed by Frédéric Auguste Bartholdi, a sculptor and the metal framework was made by Alexandre Gustave Eiffel.

There is a lot of history behind the Statue of Liberty, as it was a gift from the people of France to the people of United States to raise a monument together to commemorate the independence of the U.S. The statue is a figure of Libertas, which is a robed Roman liberty goddess. Lady Liberty with her right hand holds a torch above her head, and with her left hand carries a tabula ansata with the inscription JULY IV MDCCLXXVI that translates July 4, 1776 in Roman numerals, marking the date of the United States Declaration of Independence. She has a broken shackle and chain that lies at her feet as she is moving forward, in representation of the recent national abolition of slavery. The statue was dedicated on October 28, 1886, and after this it became a beacon of freedom and as a welcome symbol to the United States seen by immigrants that arrived by sea.

Both Bartholdi and Laboulaye thought about how to best represent the idea of American liberty. There was a relevant female icon in American culture that was a representation of Liberty, derived from Libertas, the goddess of freedom that was widely worshipped in ancient Rome, and more so amongst slaves. And since a Liberty figure adorned most American coins at the time, it seemed the perfect fit to have her represent this iconic monument.

Bartholdi required the assistance of an experienced engineer to handle the structural issues that were associated with the design of such a colossal copper structure, and he commissioned Alexandre Gustave Eiffel to design the great iron pylon and secondary skeletal framework. There was some trouble to raise funds to build the Statue of Liberty from both sides of the Atlantic ocean at the time. However, both countries used several ways to raise funds to help build the statue through various forms of entertainment, art exhibits, auctions, and more.

Thanks to the combined effort of both countries, the Statue of Liberty was finished in July 1884 and arrive to New York Harbor in June 1885 onboard the French frigate “Isere.” It had to be reduced to 350 individual pieces and packed in 214 craters to be moved. The pedestal was designed by architect Richard Morris Hunt in 1884, donating his fee to help with the Statue’s funding. It took 4 months to get The Statue reassembled on her new pedestal. President Grover Cleveland oversaw the dedication of the Statue of Liberty in front of thousands of people. The original name of Liberty Island was Bedloe’s Island, and was renamed by the United States Congress in 1956. 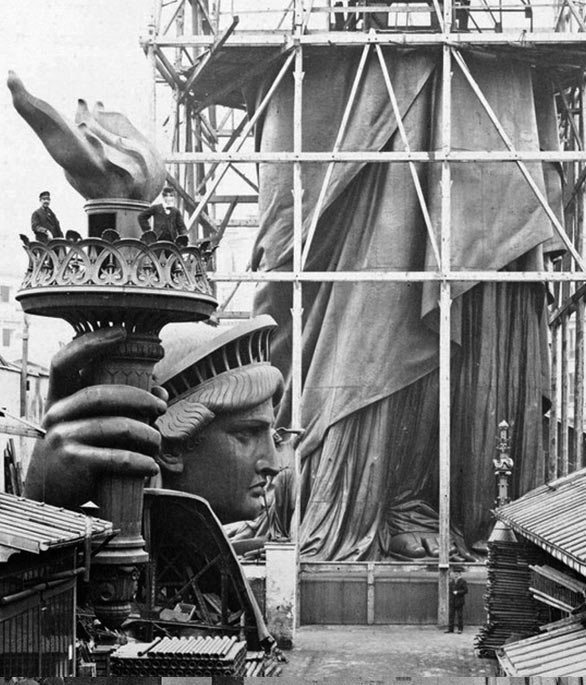 The Statue of Liberty construction starts in 1865, with Edouard de Laboulaye – a French political intellectual and anti-slavery activist – and his proposal of a statue representing liberty be made for the United States. This structure would be built to honor the celebration of one hundred years of independence and to celebrate the friendship with France. The idea of Edouard was supported by French sculptor Auguste Bartholdi and they began designing the statue of “Liberty Enlightening the World“ in 1870.

Bartholdi took a trip to the United States to find the ideal spot to place this iconic monument. During his travel he picked Bedloe’s Island, currently known as Liberty Island, as the site for the Statue. Even though the island was quite small, he envisioned it as the “gateway to America“ since it would be visible to every ship that would enter New York Harbor.

The Statue of Liberty construction actually began in 1876, where French craftsmen and artisans began building the Statue in France with the direction of Bartholdi. The Statue was completed by pieces in both countries in the span of 10 years. The bearing arm that holds the torch was finished that year and was exhibited at the Centennial Exposition in Philadelphia. The head and shoulders were finished in 1876 and displayed at the Paris Universal Exposition. The Statue of Liberty construction finished in Paris between the years 1881 and 1884, and on 1884 the construction of the pedestal started in the United States.

When the Statue was presented to U.S. Minister to France, Levi P Morton, in Paris on July, 4, 1884, it was dismantled and sent to the United States aboard the French Navy ship, Isere. The Statue made it to New York Harbor on June 17, 1885, and was received with great joy and spectacle. However, the Statue’s pedestal was not completed yet and the whole structure was not put together on Bedloe’s Island until 1886.

When the pedestal was finished in 1886, the reassembly of the Statue began with a surprising speed thanks to a great construction crew – a lot of them were new immigrants. The first part of the Statue to be reassembled was the iron framework designed by Alexandre Gustave Eiffel. The following steps to reconstruct the Statue were done without the use of scaffolding – each construction material was elevated by the use of steam driven cranes and derricks. To be able to sculpt the skin of the Statue Eiffel used the repousse technique developed by Eugene Viollet-le-Duc. It consisted of a process that molded light weight copper sheets by hammering them on the hallowed wooden framework of the Statue.

The final section to be finished was the face of the Statue of Liberty that remained veiled until the dedication of the Statue. On October 28, 1886, the statue of “Liberty Enlightening the World“ was revealed to the world. It was celebrated with a roar of guns, whistles, and applause.

If you have seen the Statue of Liberty in person, or have only seen it through pictures or in a movie, you know she is an imposing figure, so we want to share with you some fun and historic facts about this iconic monument. 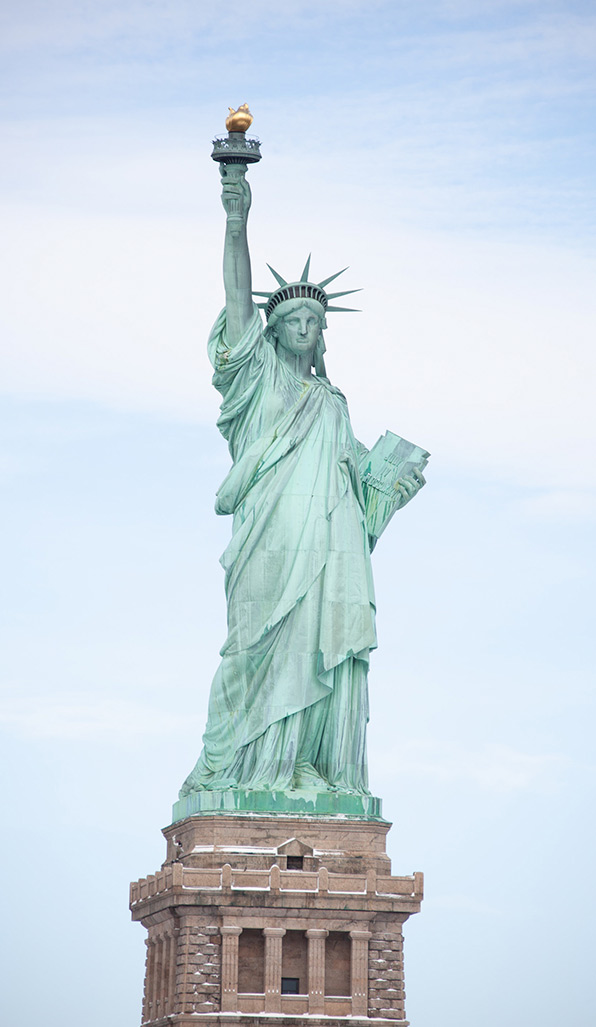