Even though the main attraction for visitors is usually the Statue of Liberty on Liberty Island, Ellis Island has a charm of its own. The Ellis Island National Museum of Immigration is located in the main building of the former immigration station complex, and it shows the inspiring and moving stories of the millions of immigrants that came to America through the golden door of Ellis Island in search of a better life. To this date, the descendants of those immigrants account for about half of the American people today. It receives over 3 million visitors from around the world each year.

Over 12 million immigrants from 1892 to 1954 entered to the United States through Ellis Island. It is located in the upper bay just off the New Jersey coast, under the shadow of the Statue of Liberty. Before it was designated as the place of the first Federal Immigration station by President Benjamin Harrison in 1890, Ellis Island had a diverse history.

Because of its rich and abundant oyster beds and profitable shad runs, it was known as Oyster Island for several generations during the Dutch and English colonial periods. By the time Samuel Ellis purchased the island in the 1770s, the island went through many names and developed from a sandy island to a harbor front, and finally into an immigration station. 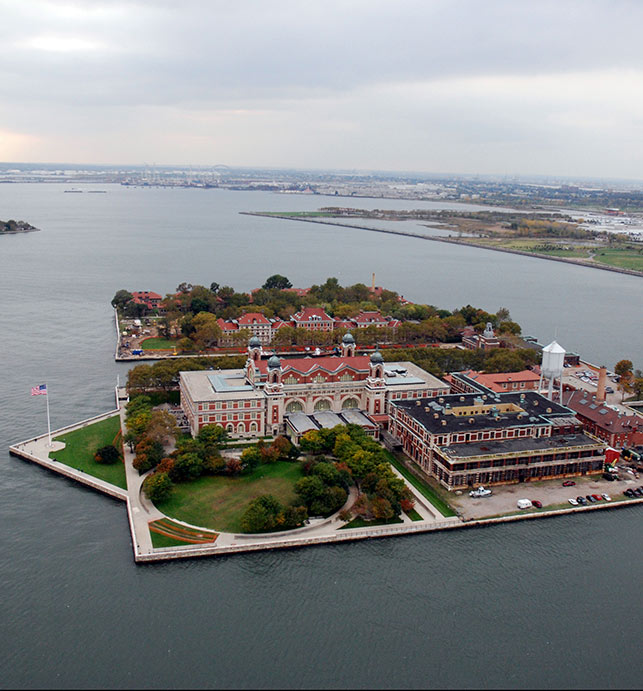 Thanks to the restoration job they did in the 1980s to the station, the building reopened as the Ellis Island Immigration Museum, a symbol of the immigration heritage of the nation. The museum has on display the role that the island had in immigration history, and you get to explore it in the context of its time. You get free access to the museum when you book any of the ticket options to tour the islands.

On the island there is also the Ellis Island Immigrant Hospital that operated from 1902 to 1951. It was built in phases, and the facility functioned as a general hospital and a separate pavilion-style contagious disease hospital. It served two purposes: first, to treat immigrants that were ill upon arrival, and second, to treat immigrants with conditions that were banned by immigration laws. The latter were often stabilized and sent back to the countries of origin. Between the time the hospital was fully operational they received and treated over 215,000 patients, about 4,000 fatalities and 350 babies were born there. To visit the hospital there is a separate tour and it is worth every dollar.

You shouldn’t miss out on the opportunity to visit and explore Ellis Island and its history. When you book your tickets to visit Ellis Island and Liberty Island be sure to choose a schedule before 2 PM to make the best of your trip and have enough time to enjoy and learn interesting and historic facts about both islands.

The Ellis Island Immigrant Hospital, also known as USPHS Hospital #4, was a United States Public Health Service Hospital built on Ellis Island in New York Harbor, that was fully operational from 1902 to 1951. It is located on Ellis Island and it still stands today! You can pick the Hard Hat Tour to go on a 90 minute walk with an expert guide through the 750-bed hospital. Highlights of the visit include exploring the laundry building where over 3,000 pieces of laundry were washed and sanitized daily. And it includes a tour of the infectious and contagious disease ward, autopsy room, kitchen, and staff housing.

It is a great day tour to take if you enjoy long walks filled with interesting facts about the Ellis Island Hospital and the tales of immigrant that were treated there and even of those that they had to send back to their country origin because they had conditions that were banned by U.S laws. Since the tour includes walking through the contagious and disease ward, there is a minimum age limitation of 13 years of age to be able to take the tour, and since the entire complex is unrestored it does not comply with American with Disabilities Act (ADA) requirements, so visitors that are on wheelchairs or scooters are not allowed on the tour.

Get Your Hard Hat Tour 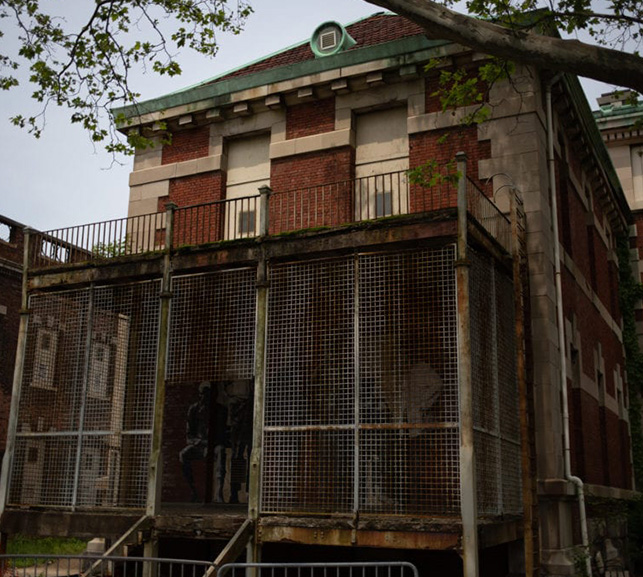 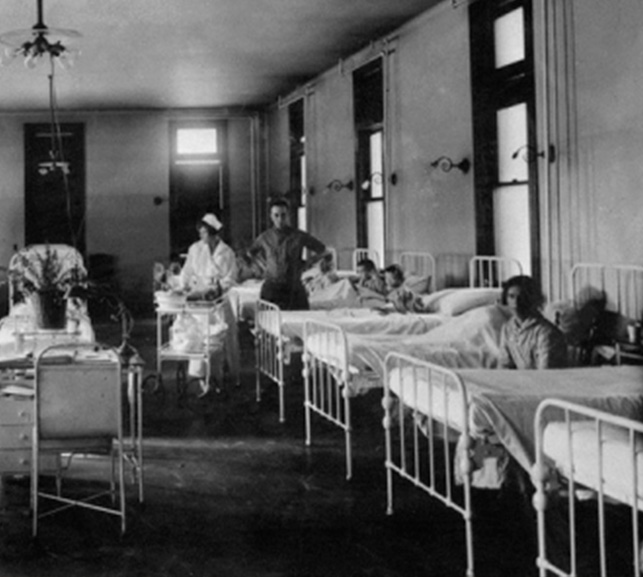 You will find yourself immersed in a building that remains in its original state so you need to be prepared to walk on uneven surfaces, and find potential hazards including broken glass, dust, cracks and loose fixtures on your 90 minute guided walk. So please keep in mind that you need to wear comfortable closed-toe shoes for the tour. Sandals, flip-flops and high heels are not allowed. Also, tours will be held regardless of the weather, and the buildings are not climate controlled. That is why you need to be properly dressed for weather conditions in New York Harbor on the day of the tour, so be sure to check weather channel at least the day before the tour. Only in the case of extreme weather conditions that the National Park Service may close the island early or for the entire day.

Be sure to check your Hard Hat Ellis Island tour schedule to make the most of your day tour and to have enough time to enjoy the 90 minute guided tour of the hospital complex, including the display of the art exhibit by French artist JR “Unframed – Ellis Island” with installation on 16 interior walls of the complex. You will be able to take pictures on the way, as long as you don’t delay the tour, and for your safety it is not allowed to record video while walking. This tour also includes a complimentary audio as you explore around Liberty Island as well.

The Ellis Island Immigration Museum is located in the main building of the former immigration complex and it is part of the Statue of Liberty National Monument and it is currently under the care of the National Park Service. The entrance to the museum is free but to get there you have to purchase a ticket for the round trip ferry ride. There are several ticket options you can choose from to visit the Ellis Island Museum, and all of them include the entrance to Ellis Island Museum with free entry and access to both Liberty Island and Ellis Island.

The golden gates at Ellis Island received more than 12 million immigrants from 1892 to 1954 that entered to the United States in search of a better life from all over the world. Imagine being back in 1890s and you are just stepping off a 1 or 2 week trip across the Atlantic Ocean, accompanied by 3,000 people aboard the ship. You would see the main building, be directed to the massive baggage room and receive an identity tag. Also picture not speaking English alongside thousands of people talking in different languages, chaotic to say the least. When you pass the main doors, you will notice a display of old luggage in the middle area of the room. 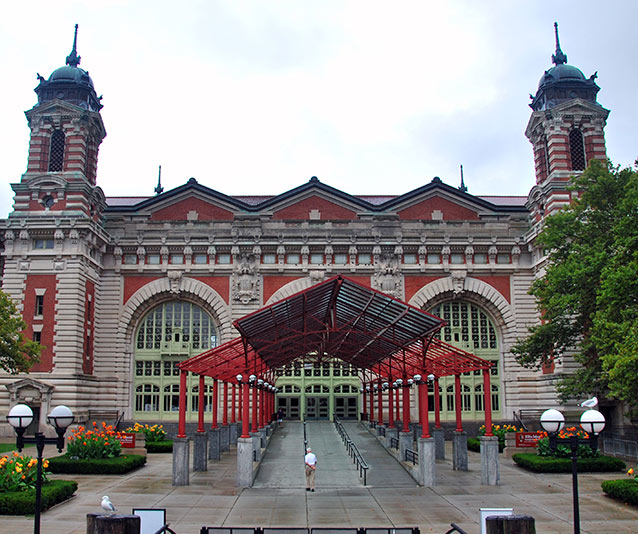 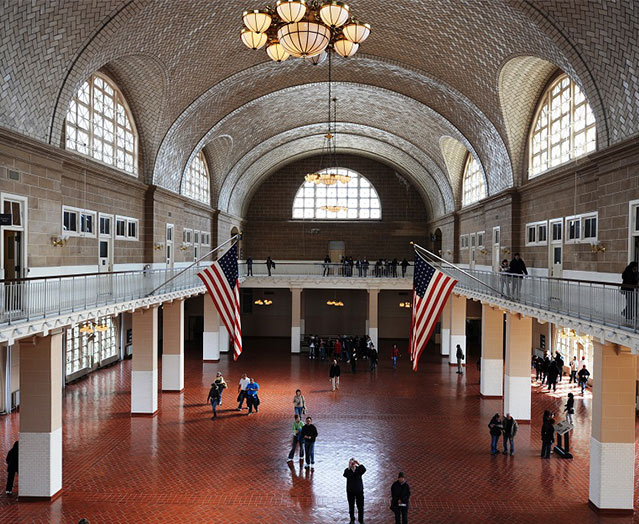 Straight ahead you will see the Peopling of America Exhibit and the World Migration Globe. On the first floor you can find gift shops and the Ellis Island Cafe – that is located in the same place as the original cafeteria. There is also an outdoor cafe for warmer weather days and a theater that shows “Island of Hope, Island of Tears“ a 30-minute film. You can also find here the American Immigrant Wall of Honor. For the tiny humans there is an Ellis Island Kids exhibit and the American Family Immigration History Center where you can research the history of your family if they passed through Ellis Island. All of this and much more is available to explore on your trip.

Remember that you will have a complimentary audio guide that will give you fun and interesting facts about the immigration complex and its history. Most of the visitors that want to visit Ellis Island will have to stop first at Liberty Island, if you wish to go directly to Ellis Island, you need to wait for about 30 minutes on the ferry before you get to your destination.